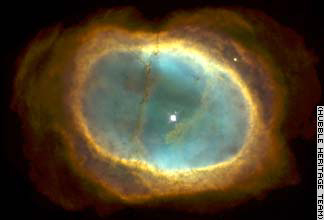 Many of the presentations have been collected and are posted below. These represent work in progress and should not be quoted without permission from the author. Questions should be directed to the authors.

Ring of FIRE, NGC 3132, also called the Eight-Burst Nebula or Southern Ring Nebula, is a glowing ring of gas formed from the outer layers of a sun-like star that experienced a cataclysmic explosion. In this color-enhanced Hubble Space Telescope image, blue corresponds with the hottest gases, red with the coolest. The star responsible for this odd structure about 2,000 light-years away is not the bright one in the middle, but a very faint one just above it.